Persistent idiopathic facial pain (PIFP) is a chronic disorder recurring daily for more than two hours per day over more than three months, in the absence of clinical neurological deficit.

PIFP is the current terminology for Atypical Facial Pain and is characterized by daily or near daily pain that is initially confined but may subsequently spread. Pain cannot be attributed to any pathological process, although traumatic neuropathic mechanisms are suspected (more here). When present intraorally, PIFP has been termed ‘Atypical Odontalgia’, and should be referred to as Persistent Dentoalveolar pain (PDAP). Intraorally, PIFP (or Atypical Facial Pain) has been approached under the name of atypical odontalgia (AO). According to the ICHD 3 AO is included as a subtype of PIFP and not classified as a separate headache disorder. In a similar fashion to PIFP, most researchers have concluded that AO is a neuropathic syndrome and it has been widely referred to as ‘phantom toothache’ now referred to as Post Traumatic Neuropathic pain (PTNP). With recent developments in the classification of traumatic neuropathy due to dental treatment or other regional injuries, the term AO should not be used.

The International classification of orofacial pain has an idiopathic pain section which includes, PIFP, PDA and Burning mouth syndrome. All these conditions have pathophysiology which is nt yet understood. The International Classification of Orofacial Pain (ICOP link 4) describes persistent idiopathic facial pain (PIFP) as ‘persistent facial and/or oral pain, with varying presentations but recurring daily for more than 2 hours per day over more than 3 months, in the absence of clinical neurological deficit’.

It is important for clinicians to clearly distinguish PIFP from other persistent orofacial pain disorders that may mimic it, such as trigeminal neuralgia with persistent background pain, painful traumatic trigeminal neuropathies, myofascial pain and others. Accurate diagnosis is key to successful therapy and prevents potentially serious consequences. Currently, the prevalent theory is that PIFP is a disproportionate reaction to a mild injury, but the exact pathophysiology is still unclear. 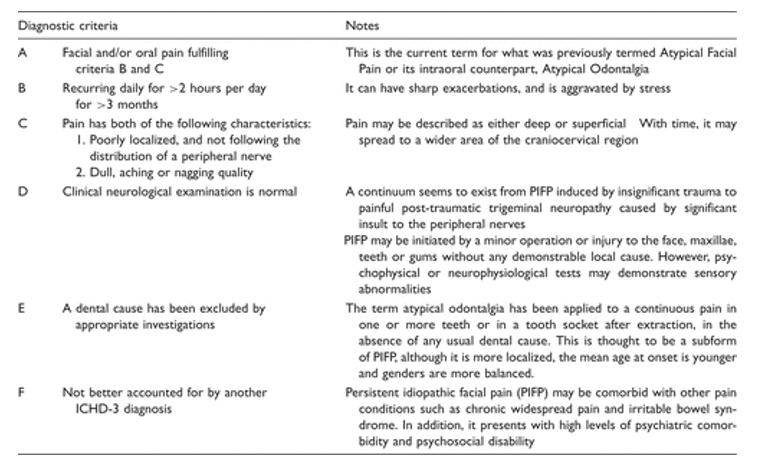 Pain onset in PIFP and PDAP is often associated with minor surgical or other invasive dental or otolaryngologic procedures; these may be reported as the initiating event or as an attempt to manage the pain. Is their pain the result of treatment or was pain present before treatment was initiated and subsequently worsened? Although there should be no clinically evident neurosensory deficits in PIFP, hypoesthesia has been reported in studies using quantitative sensory testing (QST). Patients with a neuropathic type pain following surgery or other trauma with neurosensory changes should be diagnosed as painful traumatic trigeminal neuropathy (PTTN), as defined by the ICOP.

Pain in PIFP and PDAP is usually deep but can be superficial as well. It is poorly localized, radiating and mostly unilateral, although up to 40% of cases may describe bilateral pain. PIFP is commonly described as aching, burning, throbbing and often stabbing. Severity, usually mild to severe (rated 7 on an 11-point VAS), may be aggravated by emotional stress. PIFP patients with severe pain often demonstrate a disparity between their apparent calm emotional and physical state and the reported pain severity. Most PIFP patients report persistent, long lasting (years/ decades of unchanged pain despite many interventions) daily pain that tends to spread, in a neuroanatomical viable pattern, with time. Typically, pain characteristics, location and associated features change over time. Rarely, some PIFP patients report pain free or remission periods. Often PIFP may coexist with other chronic orofacial pain or headache syndromes.

PIFP is a rare disorder, on the basis of PIFP’s rather loose criteria, there is difficulty in interpreting epidemiologic data. However, based on existing studies, the estimated lifetime prevalence of PIFP is around 0.03% and the incidence rate is 4.4 per 100,000 person years. These data clearly indicate that that. PDAP, however, has been reported to be more common resulting as persistent pain after endodontics but this is likely Post traumatic neuropathy, a neuropathic pain condition,

In orofacial pain clinics, PIFP may account for around 10–21% of the patient population. In a neurological tertiary care centre that studied patients referred for facial pain, about 21–27% had persistent idiopathic facial pain, while only 3% of patients with side-locked unilateral headache and facial pain presenting to a neurology outpatient clinic were diagnosed with PIFP. Most patients seen are female and mean age of onset is in the mid 40s.

PIFP and PDAP are diagnoses by exclusion. A thorough history and examination with necessary investigations will likely identify neurovascular headache conditions, trigeminal autonomic cephalalgias or PTNP as diagnoses. We have a diagnosis rate of PIFP and PDAP of less than 1% in patient cohorts of n=700, since working with neurologists with headache interest on clinic. (More here).

Neuropathic? Several studies have now established that there is no evidence for a pathophysiologic role for neurovascular compression (NVC) of the trigeminal dorsal root entry zone in PIFP as seen in Trigeminal Neuralgia patients. The large number of PIFP patients presenting with a history of mild trauma and subclinical sensory changes has led to the suggestion that PIFP and PTNP may represent extremes of a spectrum of clinical presentations. As such, PIFP would therefore be considered a neuropathic pain syndrome. Unchanged somatotopy of the somatosensory cortex (by magnetoencephalography) and inconsistent changes in the blink reflex and no sensory changes in a group of PIFP patients indicate no significant alterations in the trigeminal somatosensory pathways, suggesting that PIFP may not always be a neuropathic pain syndrome. Reported increased neuronal excitability at the brainstem level, disturbed inhibitory function of the prefrontal cortex, and alterations in the dopamine systems associated with either/both pain transmission and its modulation. Additionally, sensory changes consistent with a neuropathy or neuropathic pain have been shown employing QST in patients with PIFP seem to indicate that PIFP is may have a neuropathic component but this of course may be due to misdiagnosis.

CRPS? The history of a varied clinical result to injuries in the trigeminal region, ranging from mild to severe, and resulting in clinical phenotypes ranging from PIFP to PTTN, is reminiscent of Complex Regional Pain Syndromes (CRPSs). CRPS is a chronic, painful neuropathic disorder that develops as a disproportionate consequence to injury and is distinguished by significant autonomic, trophic and motor changes. CRPS is characteristically observed in the extremities but rarely in the trigeminal region, possibly due to differences in the structure of the autonomic nervous system and the reaction of the trigeminal nerve to injury. Two main subtypes have been defined: CRPS I (previously reflex sympathetic dystrophy) and CRPS II (previously causalgia). Both these entities present with spontaneous pain accompanied by allodynia and hyperalgesia not limited to dermatomal regions, and by other motor and autonomic phenomena.

Psychological Systematic screening revealed that 41.3% of patients suffering from PIFP or burning mouth syndrome (BMS) had an axis I disorder (major depression was the most frequent) before the onset of orofacial pain. Therefore, the authors conclude “that psychiatric morbidity, and comorbidity to other chronic pain conditions, in chronic idiopathic orofacial pain can be best understood in terms of shared vulnerability to both chronic pain and specific psychiatric disorders”.

Clearly, the pathophysiology of PIFP remains elusive. However, at this point in time, based on available data, one may postulate that PIFP may involve a disproportionate response to mild injury. This would therefore incriminate established mechanisms in typical traumatic neuropathy and other factors, as in CRPS.

Diagnosis PIFP is often diagnosed when the clinician has exhausted all possible alternatives that are within his knowledge base. Depending on the clinician’s knowledge and experience, this may include a number of less recognized regional pain syndromes. Therefore, we suspect that in the past, some of these less recognized regional pain syndromes were misdiagnosed as PIFP. As knowledge and diagnostic skills accumulated, many PIFP patients were diagnosed as having chronic myofascial pain, pre or atypical trigeminal neuralgia, orofacial/facial migraine or atypical trigeminal autonomic cephalgias (TACs). This continued improvement in diagnosis will aid in establishing a homogenous PIFP diagnosis that may be studied.

Treatment     The question is how do we treat a condition that we do not understand the basic causes? The lack of a clear pathophysiological basis precludes the establishment of a treatment protocol. The approach to the management of PIFP patients should consider patients’ beliefs on pain and the consequences of the pain disorder on their personal lives. Considering the psychiatric comorbidity, chronic course of disease in many patients, and the lack of drug treatment RCTs, a multidisciplinary approach encompassing the comorbidities is suggested, comparable to treatment concepts in other chronic headaches. Considering the chronicity and resulting distress, behavioral interventions are indicated. Accumulating evidence suggesting that PIFP may be a type of painful neuropathy underlies the preferential use of medications known to have an effect in painful neuropathies, i.e. antidepressants and antiepileptic drugs. Patient education is needed to clarify the diagnosis, and certainly the patient should be discouraged from any further invasive interventions aimed at pain relief in the absence of clear associated pathology.

Evidence basis for treatment of patients with PIFP is low level. Therapeutic trials of PIFP (and AFP) have been reported as efficient,

There are no contraindications to non-interventional novel therapies (e.g. based on virtual reality or complementary and alternative medicine and these may be beneficial. Hypnosis might be a promising approach for therapy. However, the evidence for psychosocial interventions is limited, due to the lack of controlled studies. When all treatment fails, some have suggested pulsed radiofrequency treatment of the sphenopalatine ganglion, but this is based on an open trial in a small number of patients and there is no highlevel evidence for this or any other neurosurgical type of intervention. We do not recommend invasive procedures, as these always carry the risk for inducing a traumatic neuropathy and therefore may end up increasing pain.

Available evidence for any of the treatments is limited, and randomized clinical trials are missing. We therefore recommend a conservative, multidisciplinary approach based on experiences with comparable chronic headache disorders including medications, relaxation training, psychological interventions and physiotherapy.

We rely on donations from the public to maintain and upgrade this website. If you have found it useful please consider making a small contribution to our running costs.

The page you requested could not be found. Try refining your search, or use the navigation above to locate the post.