Trigeminal neuralgia is sudden, severe facial pain. It’s often described as a sharp shooting pain or like having an electric shock in the jaw, teeth or gums. It usually happens in short, unpredictable attacks that can last from a few seconds to about 2 minutes. The attacks stop as suddenly as they start.  In most cases, trigeminal neuralgia affects just one side of the face, with the pain usually felt in the lower part of the face. Very occasionally the pain can affect both sides of the face, although not usually at the same time. 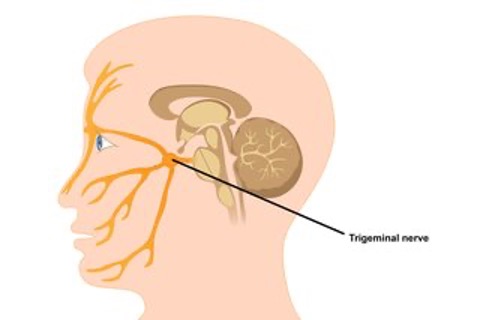 People with the condition may experience attacks of pain regularly for days, weeks or months at a time. In severe cases attacks may happen hundreds of times a day. It’s possible for the pain to improve or even disappear altogether for several months or years at a time (remission), although these periods tend to get shorter with time. Some people may then develop a more continuous aching, throbbing or burning sensation, sometimes accompanied by the sharp attacks. Living with trigeminal neuralgia can be very difficult. It can have a significant impact on a person’s quality of life, resulting in problems such as weight loss, isolation and depression.

Trigeminal Neuralgia is a neuropathic pain condition where the peripheral and central nervous system are disrupted causing nerve pain. An overview is provided in a lecture by Tara Renton and a recent article provide up to date information about the ypes and novel management of TN (Link 3 – coming soon)

According to the “International Classification of Orofacial Pain, 1st edition (ICOP 2020), TN is “a disorder characterised by recurrent unilateral brief electric shock-like pains, abrupt in onset and termination, limited to the distribution of one or more divisions of the trigeminal nerve”. TN, also known as tic douloureux, is a sudden, unilateral, stabbing OFP within the 5th cranial nerve that can be triggered by stimuli, such as talking, smoking, eating, cleaning the teeth, or shaving (National Institute of Neurological Disorders and Stroke, 2020; Nurmikko & Eldridge, 2001; Zakrzewska & Linskey, 2014). The main responsibilities of the trigeminal nerve, the largest cranial nerve, are the sensory and motor functions (Sanders, 2010). Trigeminal neuralgia can be caused by an adjacent artery or vein compression, demyelination, or injury of the trigeminal nerve at the root entry zone (Helbig, Callahan, & Cohen-Gadol, 2009). This neuropathic pain is sudden and can last from a few seconds up to 2 minutes. It can come up once a day or increase in frequency and can become almost continuous; the pain can continue for days or even months, ease for weeks or even years and then reoccur (O’Callaghan et al., 2020). Characteristically, TN more commonly affects the right side of the face (Zakrzewska & Jensen, 2017).

The annual prevalence of TN is between 10 to 300 people per 100,000 worldwide and 26 people per 100,000 in the United Kingdom (UK) (Vasappa, Kapur, & Krovvidi, 2016). This neuropathic disorder is most common in people over the age of 50 and is slightly more common in women than men; the incident rate increases with age (Montano et al., 2015). Although TN is not common in the young population, it can develop in younger individuals (Bahgat, Ray, Raslan, McCartney, & Burchiel, 2011). The cause of this disorder at younger ages is most often idiopathic; however, there are secondary causes including MS and hypertension (Di Stefano, Maarbjerg, & Truini, 2019; National Organization for Rare Disorders, 2016; Yadav et al., 2017). In patients with MS, the prevalence of TN varies from 1% to 6.3% (Montano et al., 2015).

There are no diagnostic tests for TN (National Health Service, 2019). Therefore, reviewing the patient’s medical and family history, assessing patient’s symptoms, physical and neurological examinations are important and beneficial in diagnosing TN (Maarbjerg, Di Stefano, Bendtsen, & Cruccu, 2017; National Institute of Neurological Disorders and Stroke, 2020; Zakrzewska & McMillan, 2011). Patients with TN complain of a sudden, intense, stabbing, shooting and touch-evoked facial pain in nostrils, cheek, teeth, or jaw (Maarbjerg et al., 2017; Zakrzewska, 2002). TN is a rare condition; therefore, most patients visit many health care professionals before being diagnosed with TN and effectively treated (Melek, Devine, & Renton, 2018). MS, increasing age, hypertension and previously suffering from a stroke are important risk factors of TN (National Institute for Health and Care Excellence, 2018). An MRI scan can be used to diagnose certain types of TN and find out whether there is a neurovascular compression of the trigeminal nerve, tumours, or whether MS is present (National Institute of Neurological Disorders and Stroke, 2020; Zakrzewska & McMillan, 2011).

It is unclear what triggers TN (Zakrzewska & Akram, 2011). Most common treatments for TN are pharmacological and surgical therapy. Although surgery may be appropriate, it is recommended to start with drug therapy, and then consider surgical therapy if drug therapy becomes ineffective or is intolerable (Melek et al., 2018; Obermann, 2010). Carbamazepine or oxcarbazepine, overall anticonvulsants, are the first-line therapy in patients with TN (Cruccu et al., 2008; National Institute for Health and Care Excellence, 2018). Cruccu et al. (2008) stated that both these drugs showed improvement in pain and number of attacks. The systematic review conducted by McQuay, Carroll, Jadad, Wiffen, and Moore (1995), found that around 70% of patients treated with carbamazepine experienced a reduction in pain caused by TN. Furthermore, Zakrzewska and McMillan (2011) found out that carbamazepine is very efficacious and provides fast and significant pain relief in newly diagnosed patients. However, according to Zakrzewska, Wu, Mon-Williams, Phillips, and Pavitt (2017), only around 54% of patients with TN were prescribed carbamazepine before being referred to specialists. Although there is strong evidence to show the effectiveness of carbamazepine, oxcarbazepine showed greater tolerability with no significant side effects (Al-Quliti, 2015; Cruccu et al., 2008).

Lamotrigine, baclofen, or pimozide can be prescribed as second line-therapy for patients with TN (Montano et al., 2015). As Leandri (2003) recommended prescribing baclofen as a muscle relaxant, showing the benefits for patients with TN and MS is beneficial as it is. Additionally, studies reported the effectiveness of gabapentin in managing patients with TN and MS (Al-Quliti, 2015; Cheshire, 2002; Serpell, 2002). However, Zakrzewska and Linskey (2014) stated that there is a lack of evidence to support the efficacy of gabapentin in treating TN patients. A high dose of these medications may be intolerable for some patients; the common adverse effects include drowsiness, dizziness, ataxia, diplopia, nausea, and skin rash (Jensen, 2002; Obermann, 2010). Therefore, surgical therapy, when indicated, such as microvascular decompression (MVD), and stereotactic radiosurgery (SRS), including gamma knife radiosurgery (GKRS) or cyberknife, can be alternative treatments when drug therapy is ineffective or not tolerated (Bick & Eskandar, 2017; Wang et al., 2019).

MVD is a procedure indicated when artery or vein compression have been diagnosed. It intends to relieve the blood vessel’s pressure on the trigeminal nerve without intentional damage to the trigeminal nerve (National Health Service, 2019). The outcome of this surgery is immediate long-term pain relief; therefore, it is considered as the first-line therapy amongst surgical treatment options when indicated (Tatli, Satici, Kanpolat, & Sindou, 2008). SRS is the use of a concentrated radiation beam in order to damage the trigeminal nerves at the root entry zone (Al-Quliti, 2015). SRS is another new effective treatment in managing TN patients; however, based on evidence, the outcome of MVD is more favourable than SRS. This is due to the higher rate of full pain relief, lower rate of complications, higher quality of life and lower risk of recurrence after performing and MVD (Berger et al., 2017). Although an MVD is considered the best surgical therapy for TN patients, SRS can be considered for TN patients who have multiple medical conditions or are on anticoagulation treatment (Al-Quliti, 2015). Generally, as surgical therapies could cause severe complicationsalternative treatment options could be considered instead (Tatli et al., 2008).

A local administration of Botulinum Toxin Type A (BTX-A) can be an effective and safe alternative option to consider when treating TN patients (Wu et al., 2019). The findings of the studies by Li et al. (2014) and Wu et al. (2012) examined the effectiveness and safety of BTX-A for treating 130 TN patients. The findings of these studies demonstrated the effectiveness and safety as well as significant pain reduction after injection of BTX-A. Furthermore, Zhang et al. (2019) stated that repeating the administration of BTX-A leads to better management of pain intensity.