The trigeminal nerve is the fifth cranial nerve and is responsible for transmitting sensations from the face, brain lining (meninges), eyes, sinuses, TMJs, ears, salivary glands, mouth, nasal cavity and teeth to the brain. It is composed of three branches; the ophthalmic, maxillary, and mandibular (see above). It is also the nerve that controls the muscles used for chewing.

The trigeminal nerve is the main sensory cranial nerve protecting the most important structures underpinning our survival (brain, sight, smell, airway and eating). Thus any threat to this system, including pain, is physiologically wired for the patient to run away. It’s a miracle that any patient tolerates undergoing routine dental surgery whilst awake in the dental chair. Dentists are masters in managing anxious fearful patients during incredibly difficult procedures despite this instinctive enhanced reaction to pain in the trigeminal system.

Remember the skin over the parotid and lower ear lobe are supplied by C2 and C3 (not the trigeminal nerve). 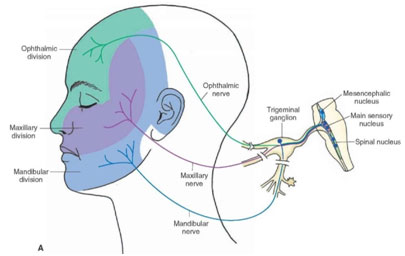 The trigeminal nerve has multiple brainstem nuclei (sensory and motor) as well as many interconnections with other cranial nerves. It swaps parasympathetic fibers and taste fibers willy-nilly, and divides into dozens of terminal branches. 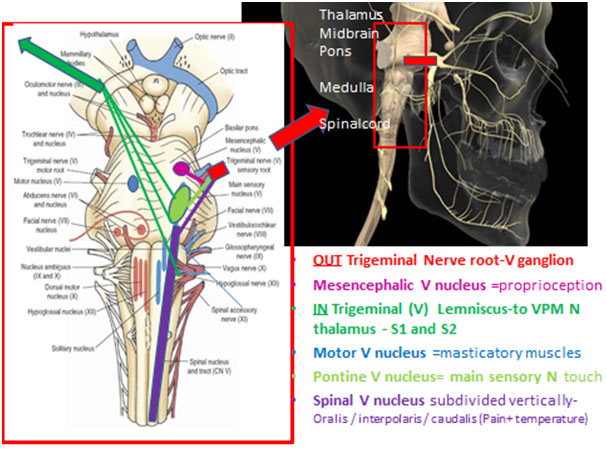 There are three sensory and one motor nuclei.

The sensory nuclei are arranged in a column which spans from the midbrain through the pons and medulla and into the upper cervical cord. The axons of these nuclei cross to the opposite side, ascending in the spinothalamic tract, to relay in the thalamic nuclei; from there, they end in the cerebral cortex. The sensory nucleus of CN V is connected to other motor nuclei of the pons and medulla. In addition, the descending sensory spinal tract receives somatic sensory fibers from CNs VII, IX, and X.

The sensory nucleus, located in the pons, is quite extensive. It receives ordinary sensations from the main 3 branches of the trigeminal. The ophthalmic division is in the lower part of the nucleus, and the mandibular branch is in the upper part.

The motor nucleus of CN V receives cortical fibers for voluntary control of the muscles of mastication. These fibers are mostly crossed. It also receives input from the mesencephalic and sensory nuclei. The axons emerge anterior to the sensory root from the lateral surface of the pons. This motor root joins the semilunar ganglion together with the sensory root.

The trigeminal nerve exits at the mid pons into the prepontine cistern and passes anteriorly to Meckel cave where its fibers rely forming gasserian ganglion.

The semilunar (gasserian or trigeminal) ganglion is the great sensory ganglion of CN V. It contains the sensory cell bodies of the 3 branches of the trigeminal nerve (the ophthalmic, mandibular, and maxillary divisions). The ophthalmic and maxillary nerves are purely sensory. The mandibular nerve has sensory and motor functions.

The gasserian ganglion lies in a depression on the petrous apex, within a dural fold called the Meckel cave. The sensory roots of the 3 branches of CN V are received anteriorly. They then pass from the posterior aspect of the ganglion to the pons. The motor root passes under the ganglion to join the sensory division of the mandibular nerve and exits the skull through foramen ovale. The carotid plexus contributes sympathetic fibers to the gasserian ganglion.

It then divides into three main branches:

Passes through the foramen ovale and gives motor supply to the muscles of mastication.

UNDERSTANDING THE NERVOUS SYSTEM AND PAIN.pdf

We rely on donations from the public to maintain and upgrade this website. If you have found it useful please consider making a small contribution to our running costs.

The page you requested could not be found. Try refining your search, or use the navigation above to locate the post.